Brief
Company
Lenovo
Team
Experience Design Group, Consumer Notebook
Duration
June 2019 - September 2019
Main Projects
Generation Z Consumption Behavior Study
Generation Z Trends Study
Generation Z Co-branding Case Studies and Proposals
My Role
Intern Design Researcher, Industrial Designer Assistant
Research Targets
Generation Z, Consumer Notebook Users
Research Methods
User Interview, Card Sorting, Survey, Secondary Research, Field Observations, Competitor Analysis
Tools
User Journey Map, Affinity Diagram, Microsoft Forms, Microsoft Excel
Project Details​​​​​​​
* Some of the project contents would only be shared with potential recruiters, please contact me for password if you are interested. Thank you for understanding!
Project I: Generation Z Consumption Behavior Study
Research Process and Methods
#2 Age Groups#
Considering that the definition of Gen Z covers every single person who was born within an at least fifteen years time range, the first thing I did to start the research was to roughly group the research targets. Based on my hypothesis that spending childhood in different times would result in different consumption behaviors, I divided Gen Z into two age groups:
Age Group I: Born between 1995 and 2000
Age Group II: Born between 2000 and 2010
Different research methods were chosen for the two age groups based on their characteristics:
#Age Group I# 11 In-depth Interviews with Card-sorting Activities
Age Group I were mostly young adults in their early twenties. Most of them were college students and young professionals who were able to properly express themselves and just started to be responsible for their financial behaviors. I decided to conduct interviews with each of them, some in-person and some remotely due to geographic constraints, to their consumption behaviors and discover insights and tensions behind the behaviors. The interview discussion guide was constructed in a way that the research target walked through and reflected on their consumption activities at their different ages with me. Card-sorting activities were conducted at the end of each interview session, in order to explore their product and brand preferences.
#Age Group II# Surveys with 102 Children's Responses and 56 Parents' Responses
Since Age Group II were mainly teenagers and very young kids, it was not realistic to conduct directly in-person research at that time. Therefore surveys were used as the main research methods. Parents of Age Group II were also considered as research target based on the hypothesis that parents would play significant roles on Age Group II's consumption journeys because of the kids' financial dependences on their parents. Two different surveys were designed to study kids' and their parents' consumption behavior, product preferences. Luckily in the end, a decent amount of responses were received and led to some solid outcomes.
Outcomes and Feedbacks
#Age Group I# 3 personas, a consumption decision making journey and a 2x2 framework of typical possessions that lead to Age Group I's trade-off decision making process and opportunity areas
#Age Group II# Pattern on children's consumption power, tensions between children's needs and parents' considerations that leads to the opportunity area​​​​​​​
#Presentation Slides# 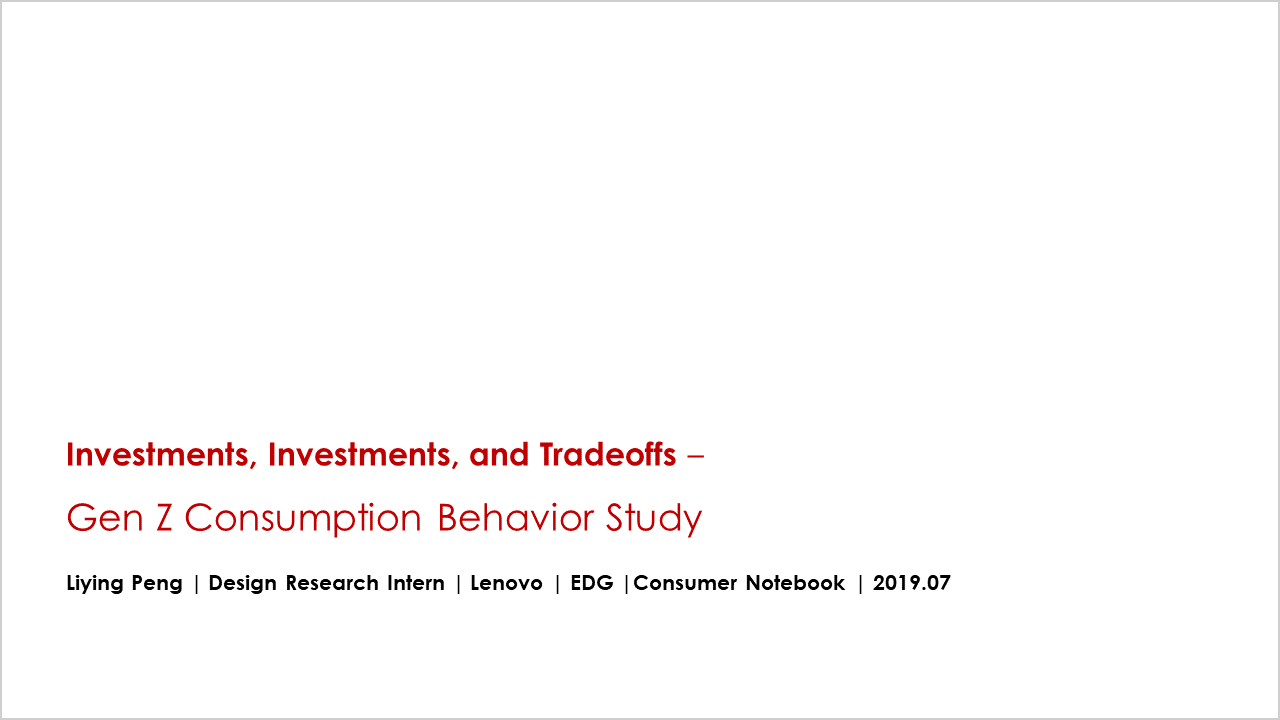 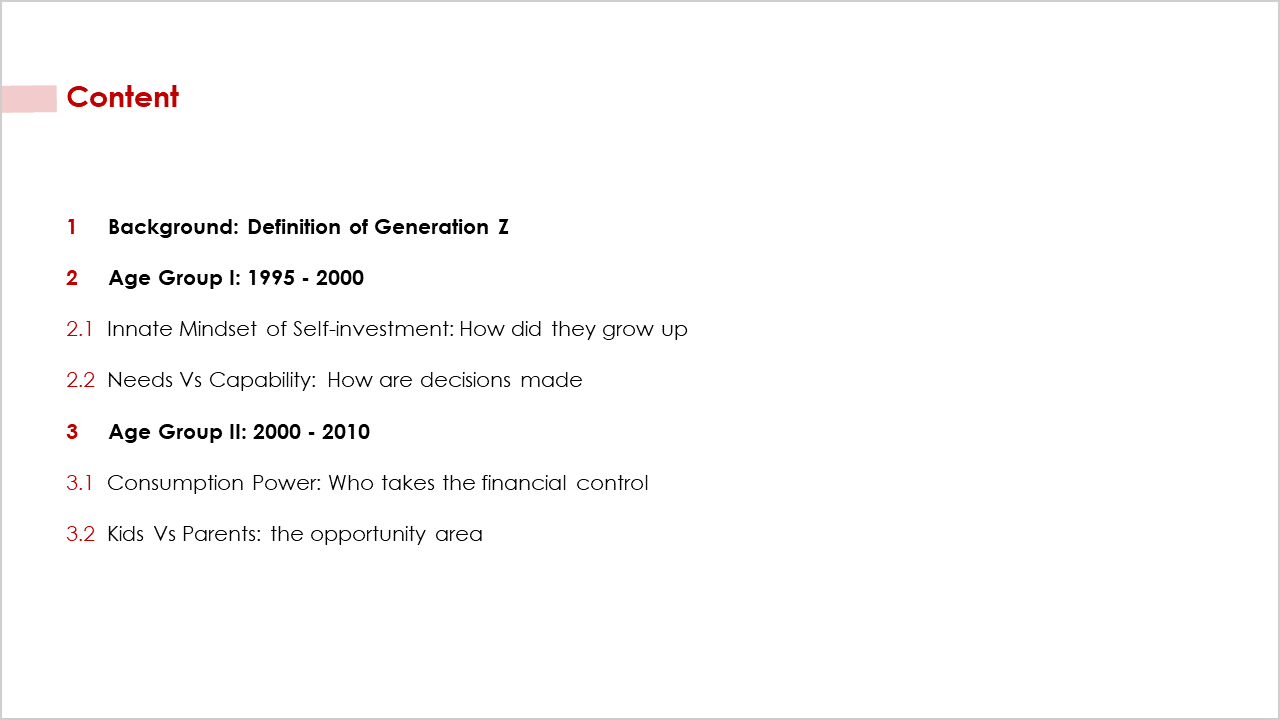 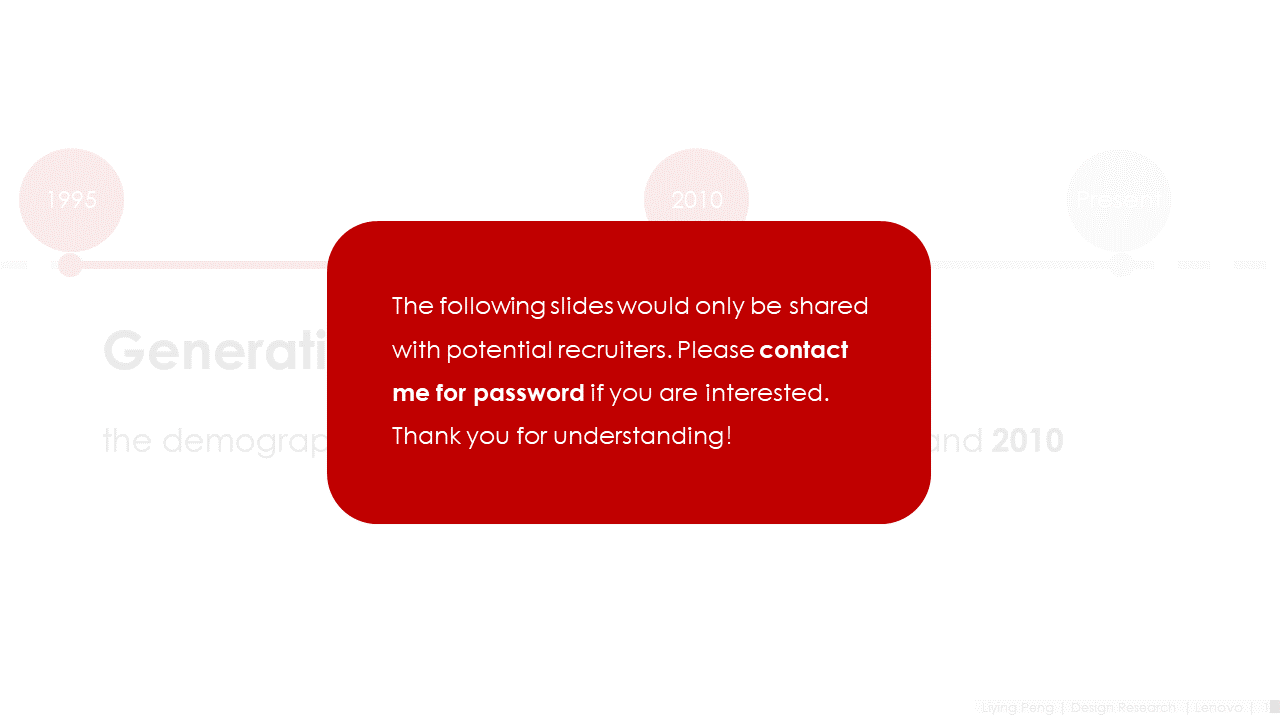 Enter Password Here to View Full Slides
#Feedbacks and Transition#
As I was finishing Project I, I decided to switch the research perspective for my next phase research. Though my co-workers could thoroughly understand the insights and opportunity areas I presented and proposed, I found from their feedback that it was somehow difficult for them to build a connection between the insights, opportunity areas that were demonstrated and supported from human's words and perspectives and their daily work - purely industrial design.
Though in fact, all my co-workers had a very decent understanding of and respect to design thinking and human-centered design mindset, they were too used to think from the products' perspective rather than purely from human's perspective while working. Based on their feedbacks, I decided to conduct my next stage research from products' and brands' perspective and was hoping to provide some more understandable and directly usable results to my co-workers. Thus Project II Generation Z Trends Study started.
Project II: Generation Z Trends Study
​​​​​​​Research Process and Methods
#Secondary Research#
Many of the public reports studying behaviors and trends of Gen Z published by different authorities and other companies were carefully studied. Findings from secondary research were screened and re-synthesized into insights and frameworks that were closely related to products and target users that my co-workers were closely watching.
#Field Observations# #Competitive Analysis#
Field observations were conducted both online and offline, especially to study how information was transmitted among Generation Z from one to another. Online social platform, online and offline product campaigns that triggered large-scale hot-topic were chosen as the main observing field.  Meanwhile, products and product campaigns that were popular among Gen Z were studied as competitors.
#In-depth Interviews# #Card-sorting Activities#
The findings from the interviews and card-sorting activities conducted with the research targets in Project I also provided great value while I was studying Gen Z trends. Those findings were analyzed and re-synthesized from another dimension. Some of the new insights found in this process played important roles in the establishment of the key framework in the outcome.
Outcomes and Feedbacks
Key triggers to large-scale information spreading among Gen Z and different layers of psychology needs that related to Gen Z popular brands and products were found. A total of 19 cases of Gen Z popular products, brands and campaigns were used to demonstrate and support the developed framework.
#Presentation Slides# 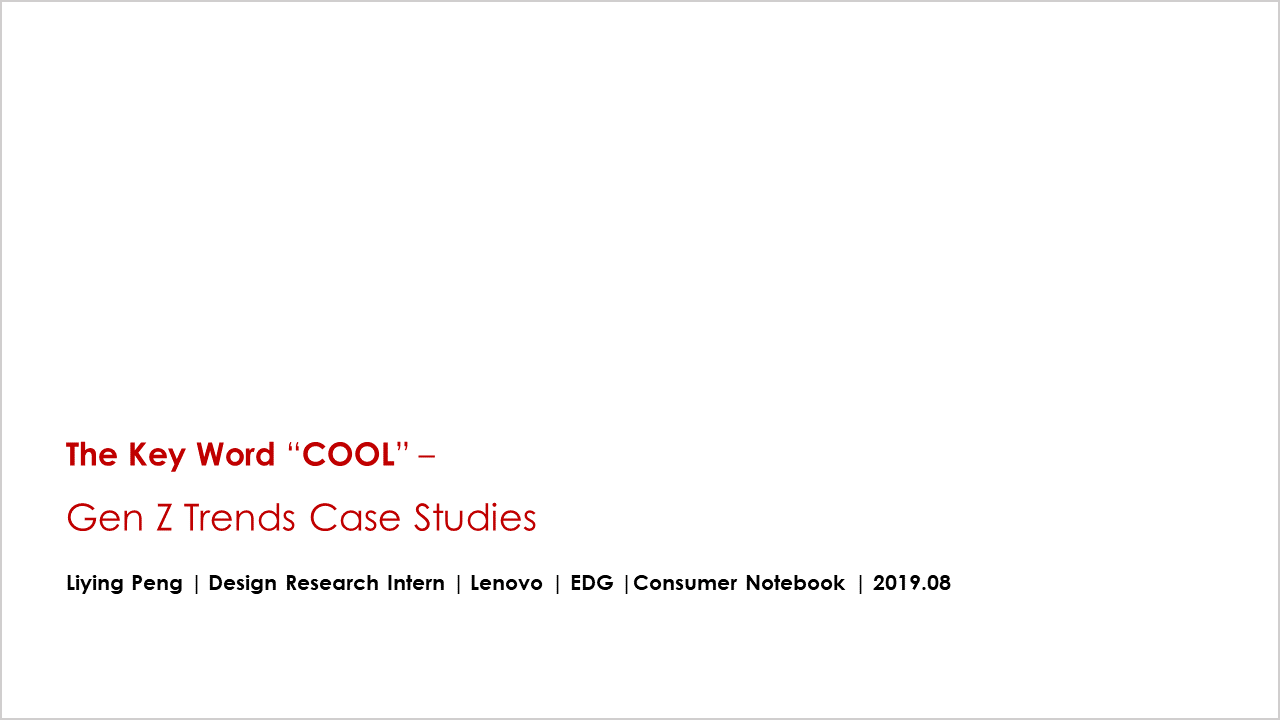 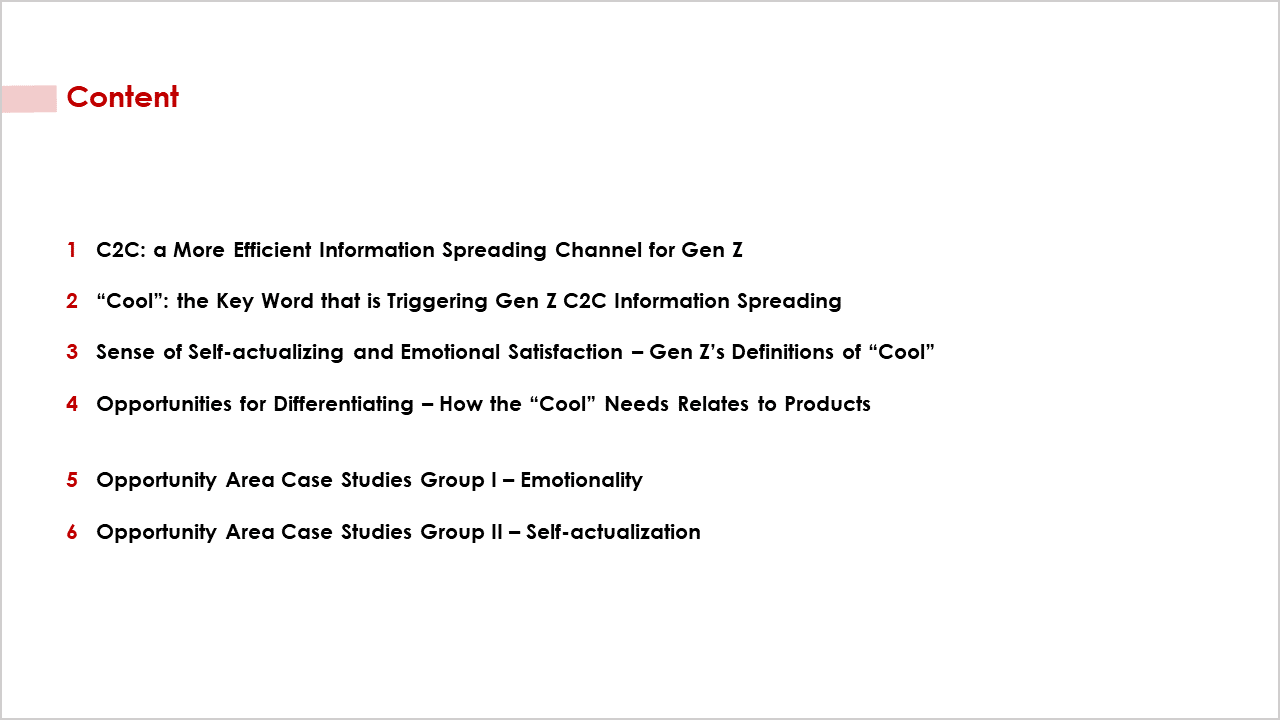 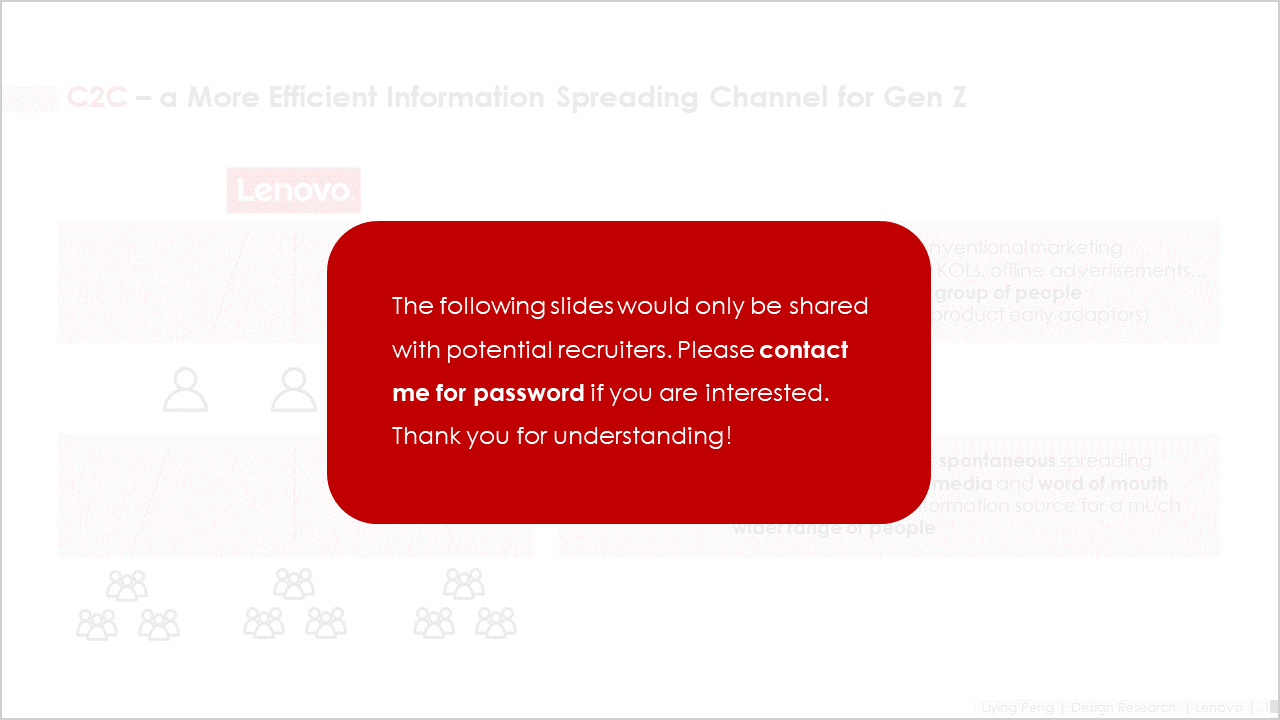 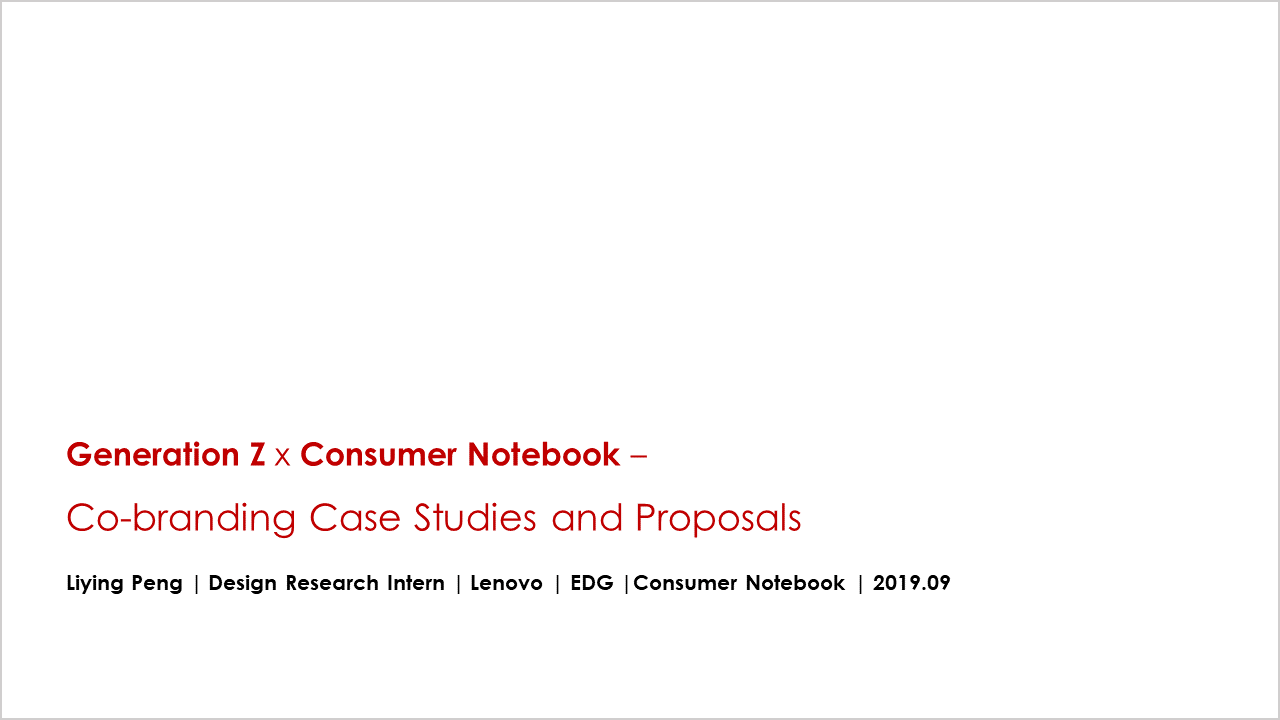 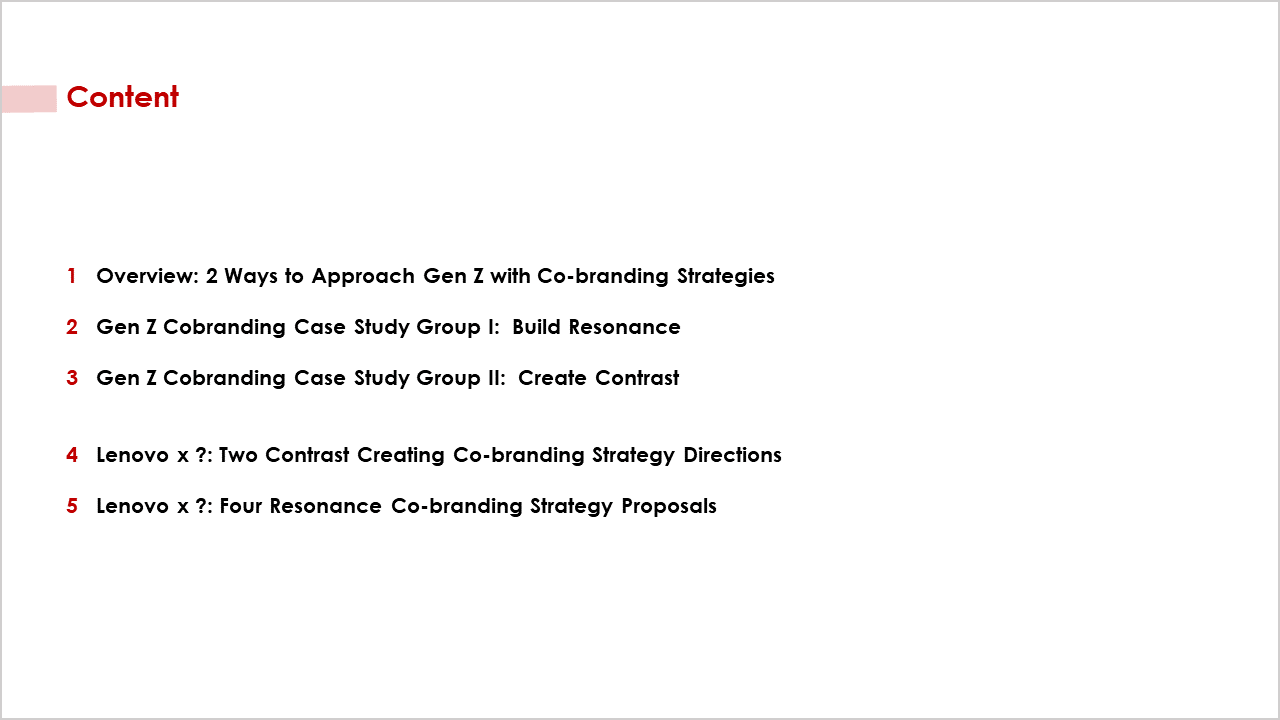 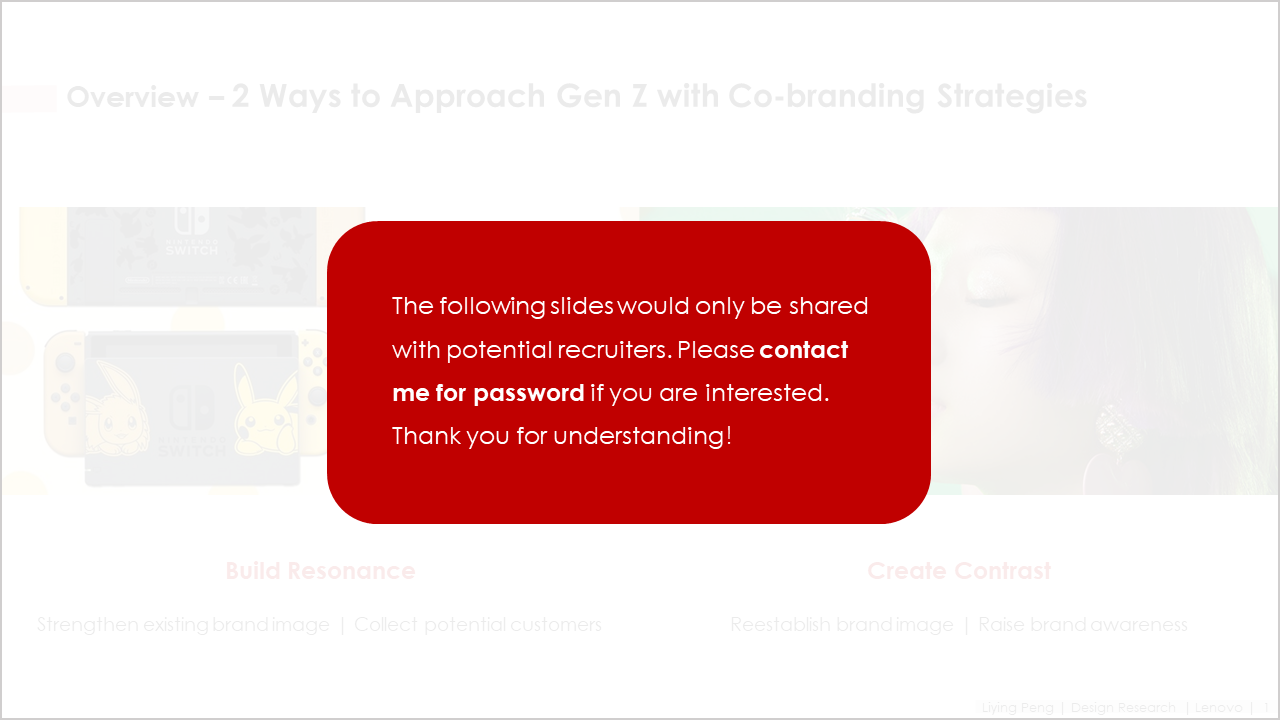 Enter Password Here to View Full Slides
#Feedbacks#
My co-workers all showed great interest in the 4 co-branding strategies I proposed. They mentioned that these ideas broke their limitations and pushed them to think in a much wider frame. Especially, they said, it was inspiring for them to learn that co-branding was not just putting two things together and design a beautiful product with two logos, but creating a convincing connection between the two things.
THANKS TO
All My Research Participants and My Lovely Coworkers
SPECIAL THANKS TO this Golden Age,
Which Allows Gen Zs to Always Chase Their Unique Beauties
and Never Need to Yield to the Mainstream Voices
↑Back to Top